The best Pharmacy schools in South Africa is probably what you are looking for right? You don’t have to go far if you want to pursue a career in pharmacy. You need to put into consideration one of these top Pharmacy Schools here in South Africa. Pharmacy is a highly lucrative profession just like pure medicine, especially when it’s learnt from the best which is a great decision to make.

One of the biggest challenges students initially faced was learning how to study in Pharmacy school effectively.

Although, to build a successful Pharmacy career isn’t difficult if good study habits, the quality of school and teachers experience are highly inculcated; concluding there’s no very big secret to being the best pharmacy student.

On this note, if you stay in South Africa or around, this article is specially written to serve as a guide for you when searching for the best Pharmacy schools in your location.

Most importantly, take your time and don’t be in a hurry to check out of here. Do not miss out on this vital information but explore what we have packaged for you. 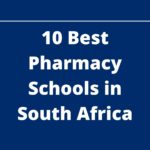 Below are some of the best Pharmacy schools in South Africa. Kindly go through carefully as most of these schools offer the traditional brick and mortar pattern of studies while some others offer online Pharmacy studies that can be taken either from South Africa or any other part of the world.

By making its education accessible to students from these communities, the management of the school aims to play a particular role in this development.

At the University of Western Cape, the Faculty of Pharmacy is a multi-disciplinary department committed to the promotion of a new vision of Health and Welfare Services. Both in the training and education, it offers and in the professionals, it produces and aims to advance the transformation of existing pharmaceutical, health and welfare services in South Africa.

The University of the Western Cape strives for;

The University of Witwatersrand is one of the best Pharmacy schools that is home to a dynamic and innovative community of academic and support staff, postgraduates, undergraduates and postdoctoral fellows.

This University in South Africa over the years has stood out as the leading leader of Pharmacy education and research. They have emerged Champions in major innovative feats in the key areas of pharmaceutical formulation and drug delivery technology, pharmaceutical entrepreneurship, management of drug therapy, counselling on the use of medication, etc.

Students can take undergraduate: BPharm programs; as well as postgraduate level programs which include Masters and PhD programs.

Shorts courses are also available for students to take such as in:

The Potchefstroom University provides a professional pharmaceutical service and also seeks to improve the scientific and professional training of pharmacists by contributing to the health promotion of the people of the Republic of South Africa and the world at large.

In the interest of the health of South Africans, they also promote the pursuit of relevant, quality research to advance pharmaceutical science.

The Rhodes University School of Pharmaceuticals was founded in 1904, situated in Grahamstown with a well-established reputation for academic excellence is one of the best Pharmacy schools that offers a distinguished Pharmacy degree in South Africa.

Rhodes University is a small school having barely over 8000 students, which enjoys the distinction of having the best undergraduate pass and graduation rates in South Africa, outstanding postgraduate success rates, and the best research output per academic staff member.

Amazingly, of the 8000 students in this South African pharmacy school, about 30% are postgraduates and over 18% are international students from 54 countries around the world, which distinguishes Rhodes as a dynamic institution.

Here, students are opportune to undergo an extensive range of undergraduate and postgraduate degrees in the faculties of Humanities, Science, Commerce, and Pharmacy.

The University takes pride in its motto, Where leaders learn and where graduates who are knowledgeable intellectuals, skilled professionals and compassionate citizens, who can contribute to economic and social development and are equitable.

The school provides the competencies required for the preparation of pharmacoeconomists, clinical pharmacists and drug utilization pharmacists.

The purpose of the M.Pharm is to produce competent professionals who can practice in the area of pharmacoeconomic evaluations, clinical pharmacy services, and drug utilization reviews.

Graduates from this program will have economic, statistical, rational drug use and research knowledge of pharmacy practice.

The Department of Pharmacology at the University of Pretoria strives to research the complex interplay between biological systems and the chemical entities that affect them.

The department contributes to the current understanding of the processes that occur within organisms and contribute to the exciting field of pharmacology through this research.

At Pretoria University Pharmacy School, they work to organize and establish a Department of Pharmacology at the University of Pretoria that cares, supports, develops and retains high-quality personnel.

They also wish to lead in relevant research nationally, on the continent and globally and also initiate and develop cross-institutional research initiatives for the Faculty of Health Sciences at the University of Pretoria.

University of Port Elizabeth also known as Nelson Mandela University takes pride in producing graduates of extremely high quality through innovative teaching methods as research and teaching are the primary functions of a pharmacist in an academic institution.

Online Pharmacy programs are also offered here for students who do not wish to acquire a Pharmacy degree in the traditional classroom.

Importantly, the mission of the Pharmacy Department of the Nelson Mandela Metropolitan University is to be a unit of excellence in the fields of Pharmacy and Health Sciences, by seeking, creating, teaching and applying knowledge to the benefit of the community.

Stellenbosch University is one of the leading universities that offer pharmacy degrees in South Africa.

Stellenbosch University (SU) is home to an academic community of 29,000 students (including 4 000 foreign students from over 100 countries) as well as 3,000 permanent staff members (including 1 000 academics) on five campuses. ​

The Stellenbosch University is recognized internationally as an academic institution of excellence and is also amongst South Africa’s leading tertiary institutions based on research output, student pass rates, and rated scientists.

This school is one of the universities that offer online pharmacy degrees in South Africa. The school has trained a lot of medical and health practitioners doing greatly in the fields.

Below are the minimum admission requirements students applying for Pharmacy in South Africa must meet to be qualified for admission.

All Grade 12 seeking admission into Pharmacy must meet the following requirements:

ADMISSION REQUIREMENTS FOR APPLICANTS WHO MATRICULATED PRIOR TO 2008

For applicants that Matriculated before 2008, below are their admission requirements:

If you have an SPS of 18 or higher you may have to write the Access Assessment Battery before you can be considered for admission.

How to become a pilot in South Africa

When to hire an injury lawyer

Schoolgist - February 4, 2021 0
Injury lawyer
Anyone Can Become Knowledgeable About Personal Injury With These Easy Tips You could be stressed, fearful, and concerned about what happens after an accident. Particularly...

We provide you with the latest information on South Africa Education admission, Scholarship abroad, Bursar, and many more educational relating contents.
Contact us: [email protected]

Subscribe to our weekly newsletter below to get the first scholarship, bursary and admission news